Summer is the season of rosé – and we’re not just talking the sweet fruity concoction that is a cousin to the infamous wine cooler. Led by premium brands, rosé consumption has been on the rise in the U.S. since the early 2000s, but its origins go back much further. Much, much further, in fact, to 600 years B.C., in Provence, often considered the birthplace of rosé and still the world’s largest producer. The French can’t claim rosé as exclusively their own, however; they must give a nod to the Greeks, who first brought wines and vines to Marseille in southern France. Rosé wine was introduced around 100 B.C. when winemakers there added a short period of maceration before fermentation to the process, providing the wine with its distinctive style and producing its namesake color. The wine quickly became the preferred wine of the aristocracy and its reputation was established.

That is, until 1975, and a “happy accident” at a California winery. Sutter Home was making a white Zinfandel when a batch simply stopped fermenting. Known as “stuck fermentation,” it interrupts the conversion of sugar to alcohol. Winemakers can try to jump-start fermentation again by adding yeast or adjusting the temperature, but in this case Winemaker Bob Trinchero decided to bottle it.  Over the next three decades white Zinfandel rose to become the third most popular wine in the U.S.

Starting about 10 years ago, sales of sweet rosés began to fall while finer dry rosé wines – including sparkling wines – rose markedly. Still a fairly small segment of the overall wine market, rosé is notable more for its rapid growth than its volume. In 2015, for example, Americans spent five times more cash on premium rosé than they did in 2011. As a share of the dollar, rosé commanded just six cents in 2014, but that understates its popularity given that the price point for rosé is typically lower.

Who is drinking all this rosé? Surprisingly, perhaps, rosé isn’t the province of women only. Although 55% of rosé drinkers are female (and 45% are male), that’s actually a smaller gap than the number of women vs. men who drink wine regardless of color (57% vs. 43%). There’s even a term for the pink wine that men like to drink: “brosé.” Color stereotypes aside, everyone can enjoy the drink of summer, all year long.

Rosé is a style, not a varietal. One writer has described rosé as a light red wine dressed up to make it a white wine. Virtually any red wine grape can be made into a rosé, and sometimes white wines, too. Popular varietals used in making French rosé include Syrah, Grenache and Cabernet Sauvignon. In the U.S., rosé made from Pinot Noir is most popular, followed by Syrah and Sangiovese.

The terms “blush” and “rosé” have been used interchangeably but as a rule of thumb blush wines are typically sweeter and can be made from blending white and red wines; dry rosés such as those produced in Provence and Oregon are made primarily from red wine grapes and may come at a higher price point.

Techniques for making rosé vary, but two are most common: direct press and saignée. Direct press is the method most commonly used in Provence, where most of the world’s rosé is made, consumed and exported. Also called whole cluster pressed, this style is employed by vintners whose sole intention for the fruit is to make rosé wine. The grapes are pressed and left to sit in their skins just long enough to release the juice and develop the pink color before the juice is moved to the fermentation tank. The finished product is typically pale pink in color.

With the saignée (pronounced sahn-YAY) method, more common in the U.S., winemakers use the fruit to make both red and rosé wine. After the fruit is crushed – either by machine or through the weight of the grapes themselves – the juice is allowed to stay in contact with the skins and seeds for anywhere from a few hours to a few days. When the wine has reached the desired color – often a deeper pink than direct-pressed rosé – winemakers bleed about 10% of it off and ferment it separately to become rosé. (Saignée literally means “to bleed” in French.) The remaining juice is made into red wine, and may be darker in color with a richer and more intense flavor as a result of the juice extracted for rosé.

Each method has its fans and its detractors, and there is no right or wrong. The way to keep the two styles straight is by determining whether the rosé was “bled off” from an eventual red wine (saignée) or all the fruit was used to make rosé (direct press). No matter how it was made, one of the nice things about rosé is that it is ready for drinking immediately; none of that cellaring and patiently waiting to enjoy. Rosé is tickled pink to quench our thirst for instant gratification.

Oregon may be the world’s premier producer of Rosé of Pinot Noir. The key grapes for rosé in Provence are Grenache, Cinsault, Syrah and Mourvèdre (or Monastrell), whereas in Oregon the dominant grape for rosé is Pinot Noir, the varietal for which the state is best known.  Travel & Leisure magazine calls the notoriously finicky Pinot Noir “a bit more intellectual” than other grapes, but one that shows its fun side when made into rosé.

Acrobat, produced by King Estate Winery, uses a blend of both winemaking methods – saignée and direct press – to make its popular Rosé of Pinot Noir. Named a “Best Buy” by Wine Enthusiast for the past two years, Acrobat Rosé is available nationwide and retails for about $14. The fruit comes from throughout Oregon, with King Estate grapes being the single biggest source.

The word most often used to describe rosé (after pink) is strawberry, and Acrobat Rosé is no exception. Along with hints of strawberry, other red berries, lime and even pomegranate are apparent on the nose and on the palate. An exuberant salmon-pink hue, the wine is lively and playful to start with a fresh, focused acidity providing a backbone to the wine. The ripe fruit flavor is layered throughout the mid-palate before coming to a crisp finish.

Acrobat Rosé of Pinot Noir made its debut with the 2011 vintage and has steadily grown in popularity ever since. As with Acrobat Pinot Noir and Pinot Gris (and Chardonnay since 2015), Acrobat Rosé is a wine for everyday drinking and for special occasions alike. Rosé in particular is a versatile drink, pairing well with a wide range of foods.

While not just for summer, summer is a great time to give rosé a try. After all, it’s hard to be blue when sipping a pink drink.

Read full article: The Best Chardonnays for Every Budget and How We Rated Them 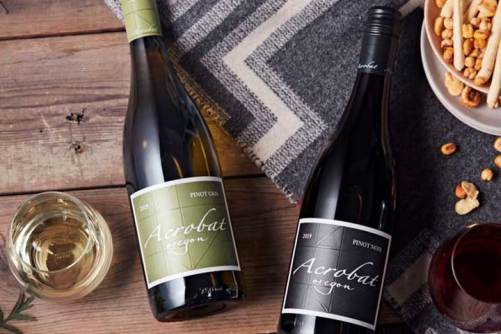 SEPTEMBER 22, 2021 When people think of American wine, it’s likely they think of the bounty grown in California. But it would be unwise to dismiss the fruits of beloved…